God loves Shorbagy senior. He always has some score to settle in his after big win speeches. This time, was Rob Owen who according to Mohamed as I haven’t read it yet, wrote in a PSA article that nobody could beat Paul.

But let’s go back to the beginning, where we saw Paul trying  to exhaust Mohamed in the first two games, pushing him with the same pace (slow to mid) he used against Tarek: 20m first game, 23 the second. Didn’t work too well for him in the first game, 11/4, making a few errors, I guess the lactic acid in his muscles was probably trying to make a run for it!

You’ve got to give to Mohamed how clever he is on the court: he managed to get a few no lets here and there against Paul, whereas his movement was clearly (to me anyway) taking the line of his opponent. But it’s done with so much discretion and poise, bless him. The ref was rarely detecting it. Lee Drew was though…

The third is a typical Shorbagy game, full of aggression, explosiveness, male hormones raging, and skills galore. 1/1, 2/2, 5/5, 6/6. At 9/6, Paul wins a great rally right after a bit of a Butt in the Way from Shorbagy, and the Kiwi goes and screams the Museum Down. Not happy Mohamed at all, going to Paul and getting very very close to him, probably saying enticing like “want a piece of me”? Paul just smiled and walked away. 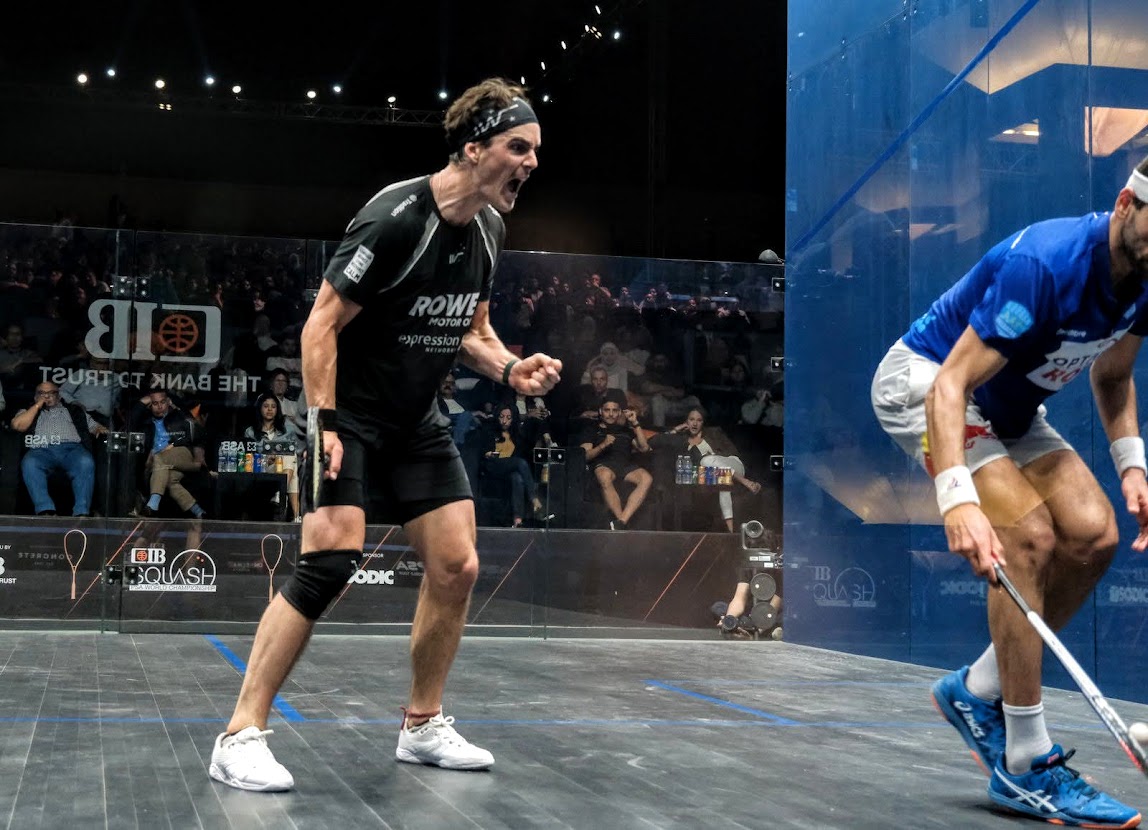 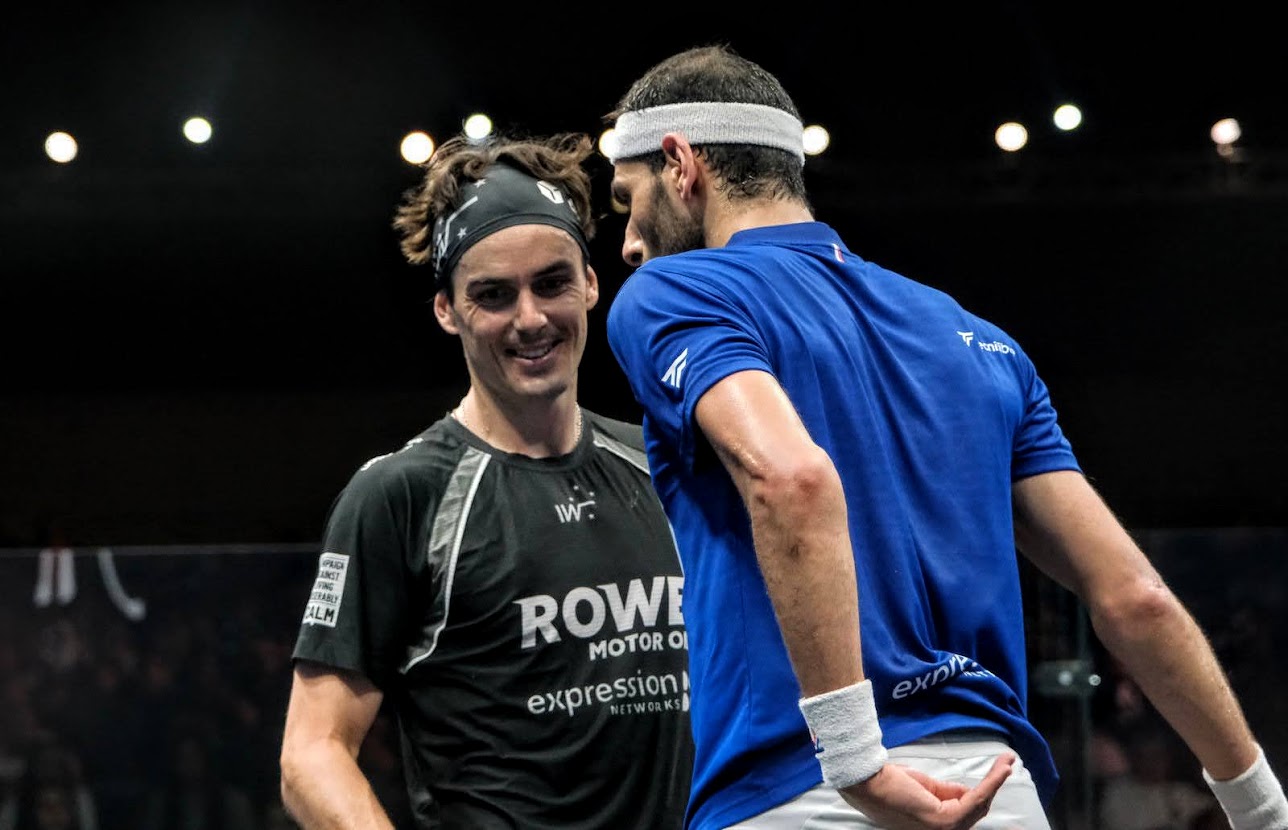 I didn’t expect that.

I certainly didn’t expect Mohamed to lead 5/0 in the decider either. 7/2, 8/4. Another gigantic rally. Both are looking tired but nobody wants to show it. 10/5, match ball. The Egyptian is flying high on his Egyptian Crowd Cloud, and finally closes the 109m match on his third attempt, 11/7, Paul being penalised by a no let, confirmed by the video ref.

World No.3 and 2017 World Champion Mohamed ElShorbagy played one of the matches of his career to dump World No.1 Paul Coll out at the semi final stage. With ElShorbagy enjoying a 9-3 record, but Coll having won the last two matches between the two, this match promised to be an intriguing affair.

Going into the match, ElShorbagy had looked in deadly form against fellow Alexandrian and World No.10 Fares Dessouky in his quarter final. Coll, meanwhile, had come through an exhausting 122-minute There were worrying signs for the World No.1 right from the beginning, tonight.

A confident ElShorbagy caught Coll out of position a number of times in opening game, with the Kiwi – who sported strapping on his right knee – struggling to react to ‘the Beast of Alexandria’s’ shots at the front.

After taking the opening game 11-4, ElShorbagy continued to play immaculate squash early on in the second. A number of lengthy rallies dominated the early stages as the players exchanged points. Coll was able to drag ElShorbagy wider as the second game progressed, which allowed the Kiwi to move from 4-4 to 6-4 up.

More lengthy rallies followed, which appeared to favour a rejuvenated-looking World No.1, who asserted himself well around the court to bring the scores to 1-1 with an 11-8 win.

More long rallies came in the third game, which was even until a fiery ElShorbagy pulled clear to have three game balls. Incredibly, though, Coll was able to pick each one off to level and then take a 2-1 lead with a 12-10 win.

At the beginning of the fourth game, errors began to creep into ElShorbagy’s game. The former World No.1, though, showed impressive resilience to battle through a difficult spell and then go on the attack to take game 11-8 and force the match into a fifth game.

The dramatic change of fortunes seemed to give ElShorbagy a huge lift in the fifth game. The 31-year-old stepped further and further up the court as the adrenaline surged and took a commanding 5-0 lead. Now brimming with confidence, ElShorbagy continued to balance watchful rallies with his signature brutal attacking squash, timing his attacks to perfection to seal a memorable victory with an 11-7 win, to the thunderous applause of the Cairo crowd.

“I’ve been in this situation so many times in my career. I think we have a habit as human beings to have a short memory, so I needed to remind everyone who I am.

“I went to Greg [Gaultier] two months ago and told him I want to come back to who I am again, I was not happy with who I am, and we put together a plan. I don’t want to get too excited of course, I have the final tomorrow, my fifth World Championship final.

“We haven’t played for such a long time and I’ve been waiting for a long time to get on court with him. He inspires me so much, his journey is inspirational and I hope he’s not going to be too hard on himself. I’ve been World No.1 and seeded No.1 at a World Champ and have never done it before. It’s so tough, there’s so much pressure on you when you’re seeded No.1 in a World Champ. He had so much on his plate this week, no one understands how much he had on his plate this week, except for the people who were in that position before.

“So I want to thank someone, to be honest. I want to thank his coach, Rob Owen, for such a stupid article he posted two or three days ago, if I’m honest with you. That was one of the most foolish things to do, to be honest. His player had so much pressure on himself this week and when I read this article, to be honest, me and my team just laughed! Because, we knew that he just put double the pressure on his player. I felt bad for [Paul] to be honest, because you don’t do that to your own player, you don’t do that when your player has so much on his plate this week. I felt bad for him and I knew this was going to [put] so much on him. That was one of the most stupid articles I’ve ever read and I really hope, as good as he is, as a great coach, but he showed that he has no experience with his player being seeded No.1 in a World Champ. So thanks to him, he gave me such an advantage in winning that fifth game, because Paul had so much in his mind in that fifth game today. So thanks Rob for the article, thanks so much for that.

“When I reached my first World Championship final, I had nothing to lose. I was so excited, I was a kid. I went through James, Darwish, a few points away from going through Ramy in the final, I had no right to be in the final, I was just a kid with big dreams. That’s what we have with Mostafa Asal. The exciting thing with him is that he has nothing to lose. And then you have Ali, who is so experienced. He’s probably the longest rival I’ve had in my career. We played so many great finals together, on all the big stages. He has all the experience so we have experience against youth, and when you have that it’s an exciting prospect. I can’t wait to watch them and hopefully it’s going to be an amazing match, like what Paul and myself just did. Hopefully tomorrow I can come back and play with whoever deserves to be there.”