I love observing. People. Listening. To what they say, or don’t say. Who they look at, or avoid… It’s fascinating… What I noted immediately was how Ali was desperate to see his brother Wael as they were warming up, and seemed calmer once Ali saw Wael and Mike Way, his coach from Harvard.

Mohamed, I got worried for him immediately. He had that same look when he came on court he had when he played THAT MATCH against Ramy in Qatar Worlds 2014. Closed face. Worried and tense.

In my opinion, he had to win the first game if he wanted to have a chance, and probably 3/0 or 3/1. I feel that the anger he fuelled his victory against Paul Coll yesterday (coming from that sentence in an article when Rob Owen wrote off Mohamed for the title as “his level had dropped”) had cost him a lot of mental adrenaline – if that exists?? But then again, to beat Paul Coll in warm conditions, or in any conditions for that matter, you need to fuel your adrenaline from somewhere…

Two completely different game plans today, and what’s amazing to me – as I’m not a coach or technician – is how Ali kept to his plan which was very simple throughout: you take the pace off the ball completely, forcing Mohamed to produce it, you play at a slow medium pace, and you twist and turn him. As for Mohamed, it was a question of taking the time away from Ali, pushing him to do a lot of work fast and to the front.

And even when the plan for Ali didn’t seem to work that well – when you find yourself 2/1 down, you might think you are doing something wrong – Ali KNEW Mohamed was bound to tire eventually, as he did in Canary Wharf before the COVID wave. I remember Mohamed admitting that he HAD to win in 4, that he had nothing left in the tank. And I think that Ali remembered it too….

Mohamed was the quickest off the blocks. He knew he had to shorten the rallies and made them very hard for Ali. Sublime start, 4/0, 6/1. Ali was playing at the false comfortable pace, started getting into the match slowly. Mohamed, a bit disturbed by the “Ali, Ali, Ali” chanting coming from all the Wadi Degla kids at the back of the venue, eventually got used to them. 8/4, 9/5. The rallies are getting longer, I can see the tactics that Ali is employing clearly. The Wadi Degla man comes close, 8/9, but relentless attack from Mohamed, it’s game ball, 10/8, 11/9 in 18m.

The second game is shorter, the ball is a bit more dead, the rallies are played at a faster pace. It’s Ali ahead, 4/1, 6/2, 9/4. At 9/5, Mohamed has an incredible reflex as the ball is coming towards his body. He plays behind his back, and finds the nick… A lovely moment between the two, where they smile and bound for a few seconds.

7 winners each in that one…

Again in the third, Mohamed fast pace works wonders, 6/0, 7/2, 8/3. I’m sitting amongst the Ali camp, Aunty at my left, Wael/Mike in front. I feel how nervous they are. The Shorbagy camp is on my right, mum dad, Greg and Marwan, are supporting their boy and feel he might be close to creating the upset.

Like Nour in the previous match, Mohamed is warned not to get coaching from the crowd. He answers with a smile “I look for support, not for coaching”…

And Ali knows. We all know. He makes the third three rallies extremely hard  for his opponent, 2/0, 4/1. Mohamed seems to have trouble moving, but he keeps fighting hard, 6/2. A huuuuuuge rally at that point, ending in a tin as Mohamed cannot take a proper stand on his body. He could have stopped – not sure if it’s a cramp or an injury. But as respect for his opponent, he kept going, finally losing 11/2. 11m last game.

Ali keeps his title and Mohamed, his pride. Elhamdoulilah. 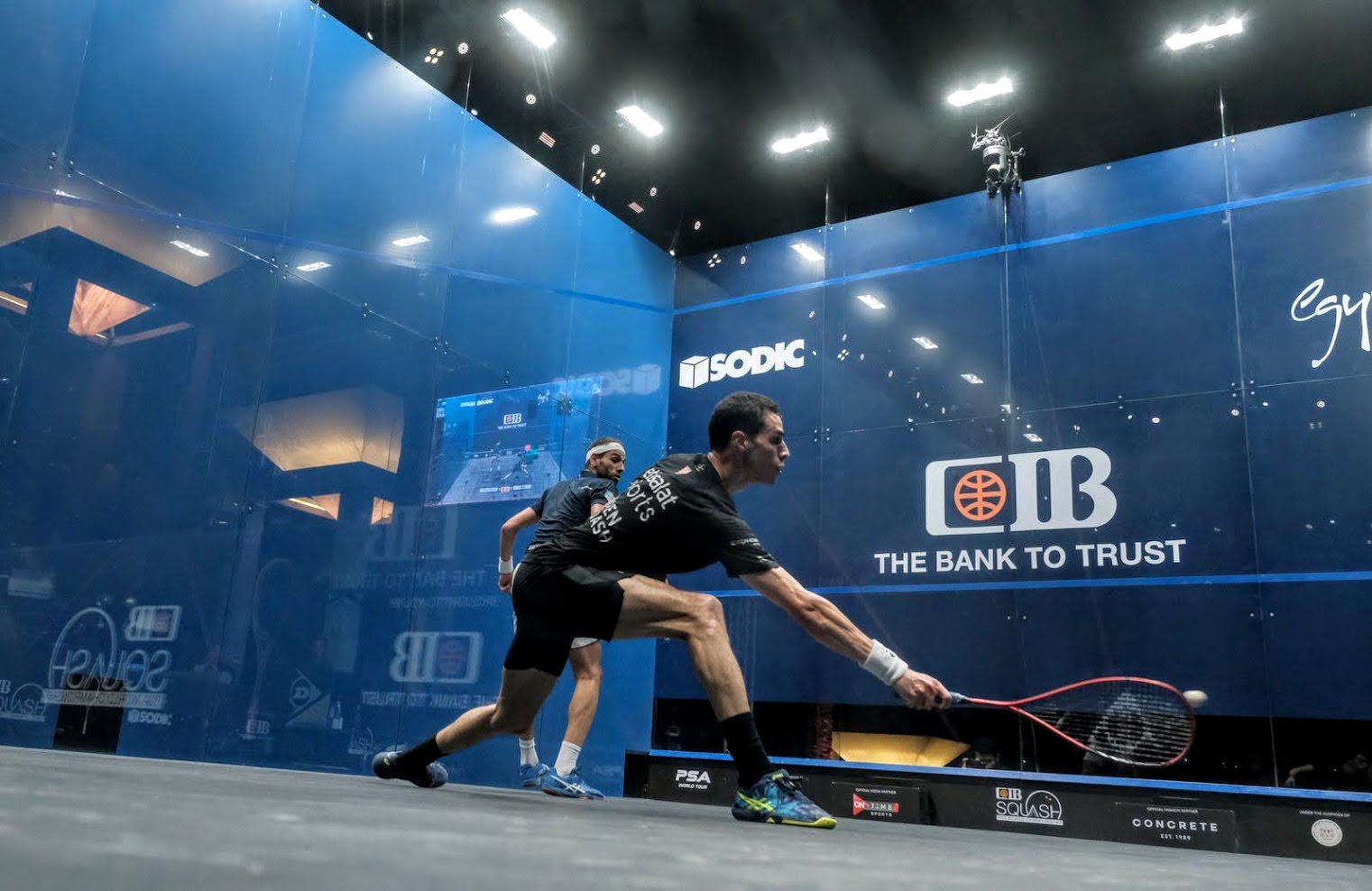 Ali Farag defended his World Championship crown and reclaimed the World No.1 ranking as he came from behind to defeat 2017 champion Mohamed ElShorbagy.

In a free-flowing first game, ElShorbagy came tearing out of the blocks, opening up a 6-1 lead as the Alexandrian dominated the front of the court. The defending champion began to pick up points as the game wore on, but was unable to overturn the deficit, as ElShorbagy took the first game 11-9 in 18 minutes.

El Shorbagy took up residence on the T for the opening phases of the second game, before Farag finally managed to move up the court and take a run of points. Despite a cheeky flick from ‘the Beast temporarily breaking Farag’s momentum, the World No.2 took the second game 11-8 to chalk off ElShorbagy’s lead. 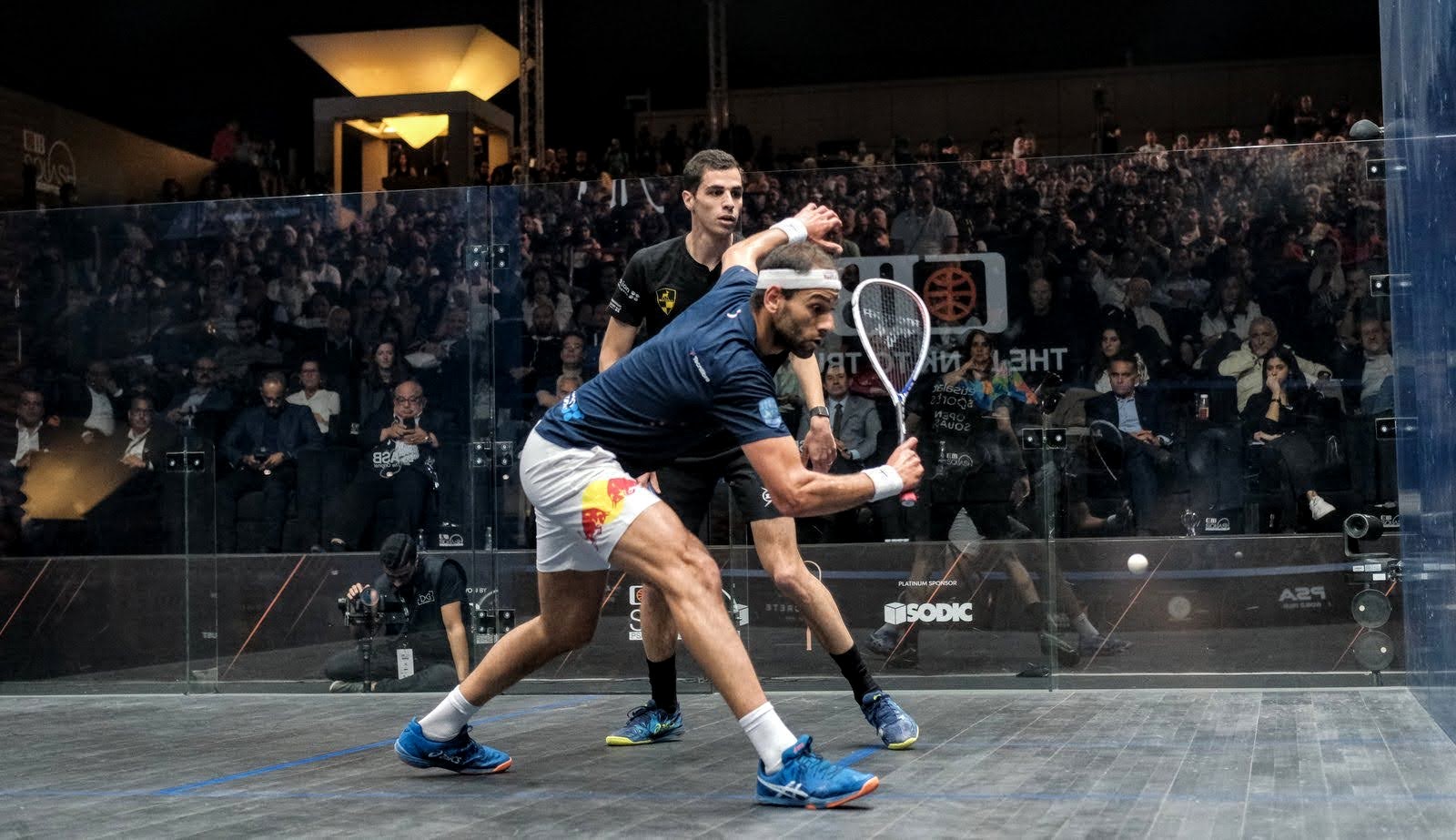 Farag appeared to drop off at the beginning of the third game, as ElShorbagy once again stormed into a strong lead, taking the game’s first six points before Farag was finally able to register a reply. After weathering a mini revival from Farag, ElShorbagy – whose touch was exquisite all night – pulled ahead once more with an 11-7 win.

Both players made a number of errors in game four, with Farag too loose and ElShorbagy tinning when when placed at the front. After Farag opened up a lead, ElShorbagy was able to level the scores at 9-9. Farag had game ball at 10-9 and converted at the first attempt to take the match into a fifth game, though not before he was made to wait by a video review appeal from ElShorbagy.

A thrilling blitz from Farag put ElShorbagy on the back foot right from the off in the decider, as the 30-year-old covered every inch of court. Shellshocked, ElShorbagy had no answer to Farag’s burst, and the World No.2 was able to defend his title and reclaim the World No.1 ranking from New Zealand’s Paul Coll with an 11-2 win. 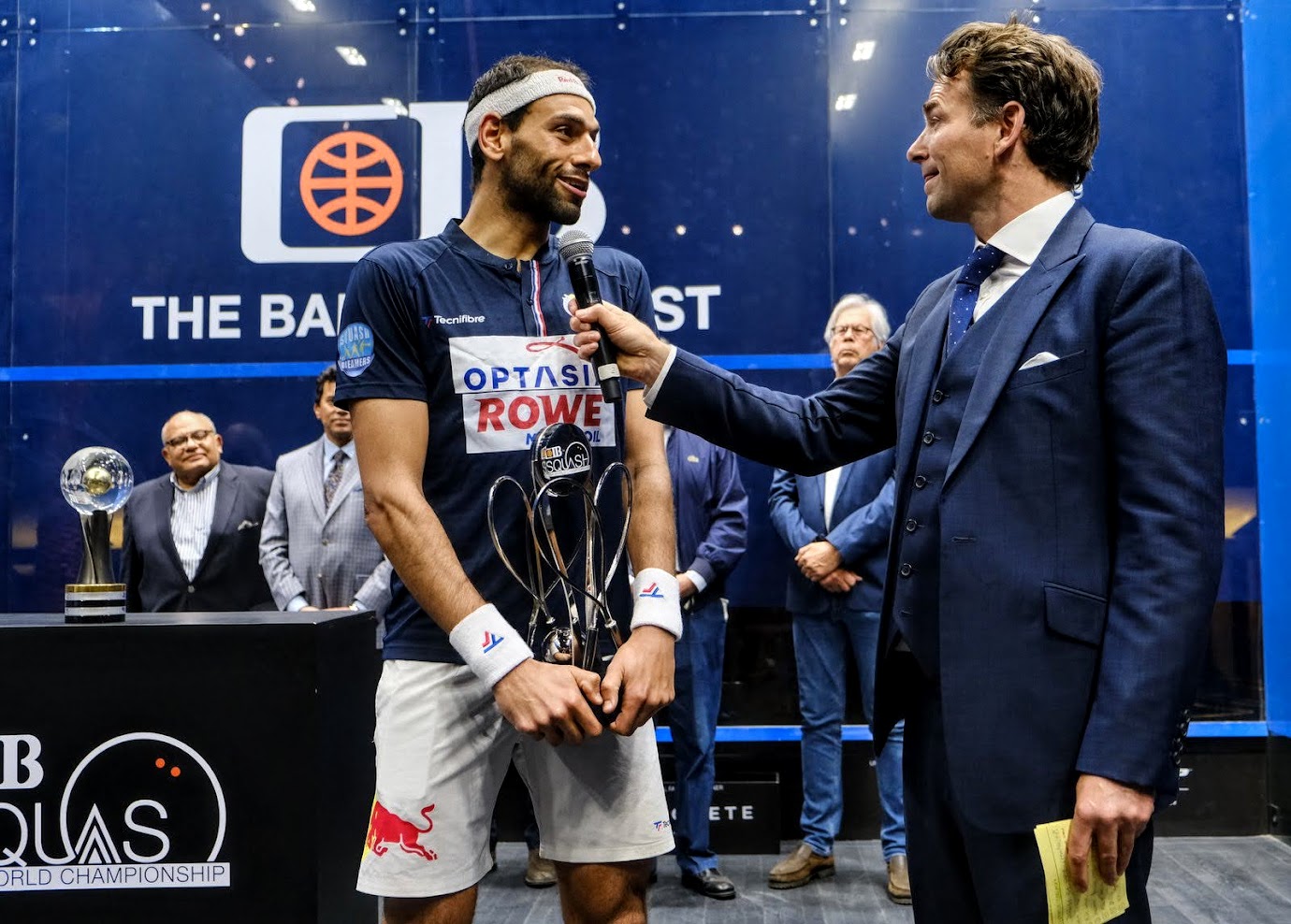 “I’m very, very proud of my week. Two months ago, I was in a very, very bad place; at the British Open I lost first round. Nobody knows, but I was actually thinking about retiring, or thinking about walking away from the game. I was in a very bad place mentally and that’s when I decided to give a call to Gregory Gaultier and as for help. I didn’t know what was coming. I didn’t know what was happening to me and he told me to come to Prague and we put a plan. If you told me two months ago that I would be in the world champ final this week, I would have laughed and told you you’re lying to me.

“Honestly, I’m really glad I’m playing in the big stages again. I haven’t been even making the quarters since last September in a big event. So to be back playing the big events again, back in the final, I’m really, really proud of that. Gregory Gaultier, I owe him everything to get the hunger back for me the motivation, without him, I wouldn’t have dreamed to be here. So thank you so much. Thanks for everything.

“Just a few words about Ali, he’s a great champion, there is no one more deserving of this world championship title than him . The guy is a great example a great role model for our sport, and I’m really happy for him. He’s achieved so much in such a short period of time and I’m glad I’m back to renew our rivalry again. I hope that we keep playing these big matches again.” 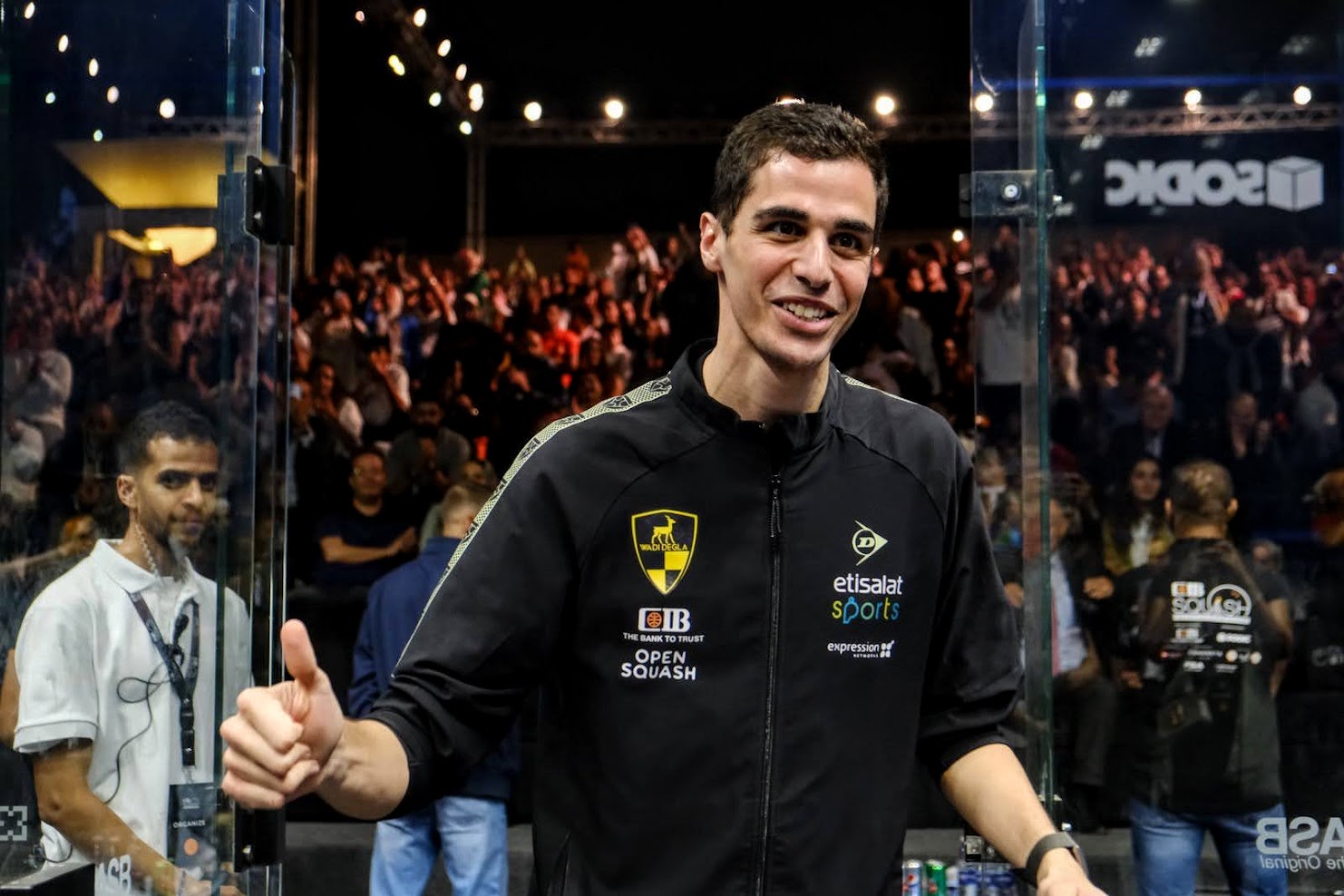 “I was just telling Nour, I don’t know how I feel.

“Mixed emotions of joy and relief. I’m really happy to be done with the tournament; the pressure we live through every day. I didn’t come into this week with that pressure, but then the week started and I felt the pressure. I’m super proud of my week, I had to go through a very tough draw.

“I had to go through a lot of tough players to reach the final and today, as I say it over and over and over again, I’m playing against the greatest of our generation. He’s the one who pushes us every single day in training, I have a lot of people around me who, if I’m being honest, wrote Mohamed off after the past few months and I told them there’s no chance Mohamed’s going to go away without a fight. He’s going to come back smarter and harder and he did. It’s inspiring how every time he faces a challenge he comes back stronger, we saw it yesterday and here today.

“There are so many people that I want to thank. My brother, we just had this conversation a few days back, it started at midnight, he was supposed to leave as he was in my home and we started talking about squash and it went on until six in the morning, which was not ideal for my sleep preparation! But something clicked in my head and I’m super blessed to have him in my life and I can’t thank him enough for everything he’s done.

“My parents, their blood pressure is not in a good state because of me and what I put them through throughout my career, but their support is unreal and I cannot thank them enough. They’re the reason I am who I am today, so I’m super thankful.

“My beautiful wife, do I need to talk much about her? We see her on court, how inspiring she is, how supportive she is.

“Karim Darwish, I’ve had tough times in the last couple of months, even when I was doing well results-wise. You go through those bouts of doubting yourself, but he never stops believing in me. When someone you look up to that much believes in you, it helps you keep pushing yourself every day, even if you’re faking it. Because he believes in you. I told him after the match, thank you for being in my life.”

“I’m extremely blessed to come out as the winner today. ”