I will keep from this match the image of Nouran’s dad coming to offer a bottle of water to Ater, Nour’s dad before the start of the match…

To be honest, I had Nouran as a winner as I didn’t find that Nour was playing her best squash since the beginning of the event, while Nouran played the best I saw her (and Amanda) play in the semis. And actually, that’s probably why Nouran didn’t win and Nour did…

And I realise that quickly in the second game…

Well, Nour offered her 6 points in that game, and played 6 winners. Nouran gave away only one point and played 5 winners. 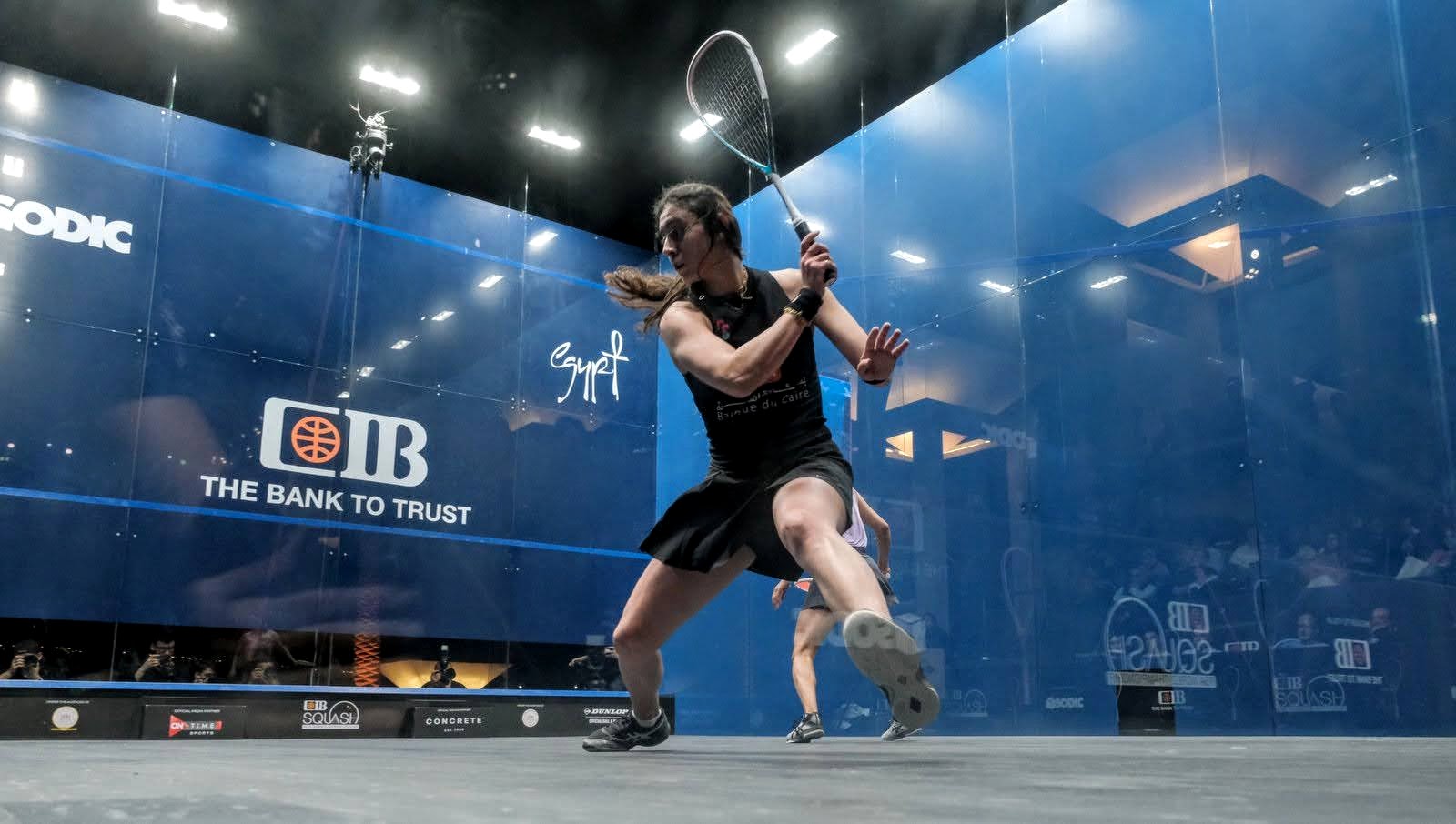 The second game showed me (and accessorily others ha) how flat was Nouran. And then it came back to me… her incredible match against Amanda, the heavy and constant hitting of that match… and although she worked so hard to try and vary the height and mixing the pace of her attacks, she was trading at the back, 4/0. She had a great spell there, 6 points in a row, but the rallies became shorter from that point on, and it’s was Nour in two hands, 10/6, 11/7 in 12m.

7 winners for Nour, only 3 for Nouran…

And it became even more obvious in the third, down 2/0, 5/1, 7/2. Nour was playing the best squash she’d played for a long time, and Nouran just couldn’t take the time away from her opponent tonight. Still a big push from Nouran, getting back to 6/7, but a couple of very hard rallies at that point ,and it’s 11/8 for Nour in 13m.

The score in the last game doesn’t tell the story, 11/6. The length of the game does. 16 long minutes. Again Nour took a better start, playing crispy and accurate squash, 6/3, again Nouran clawed back close, 5/6, but it’s Nour again, match ball, 10/6, taking her 6th title on her second attempt. 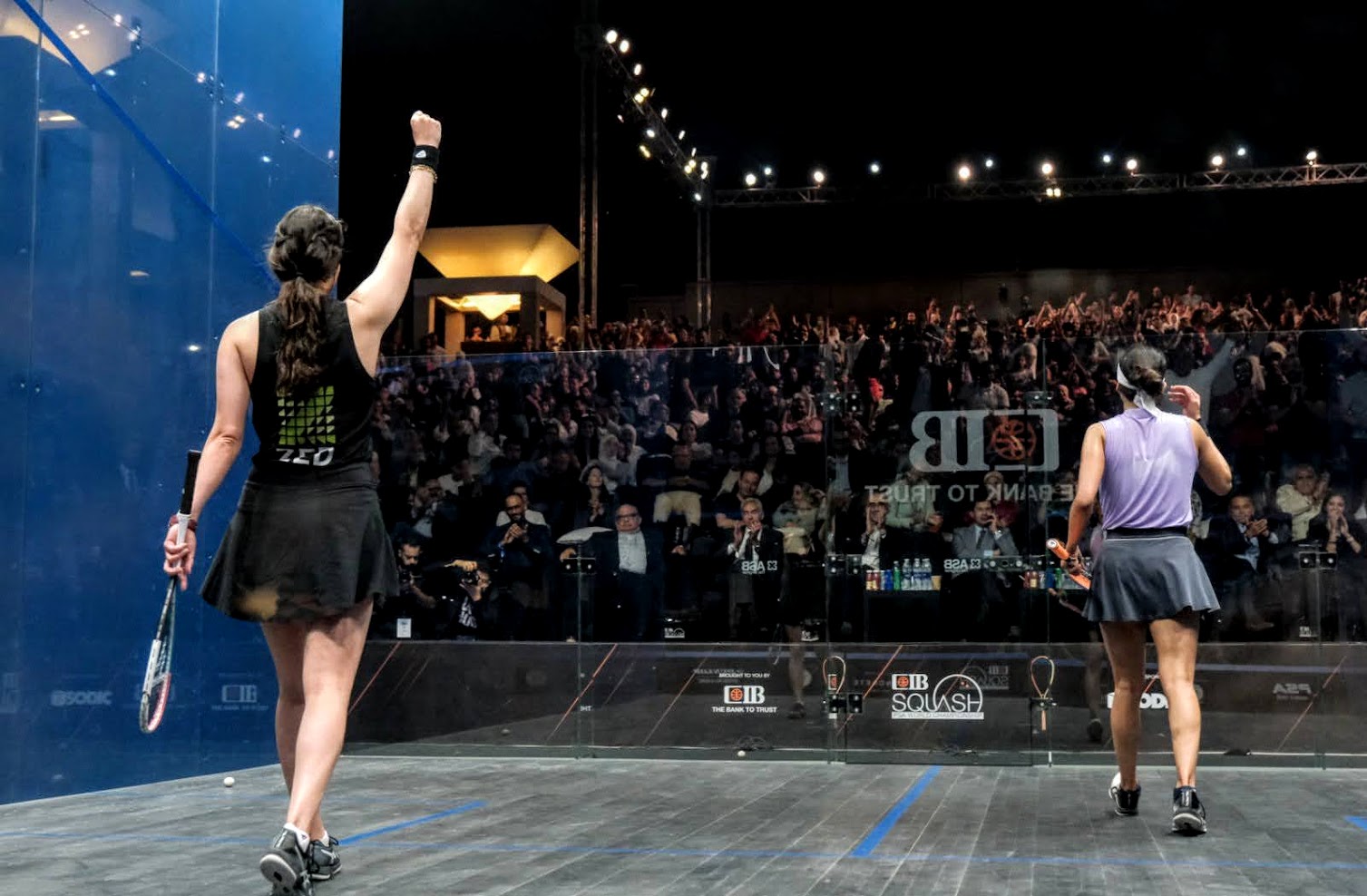 Defending Champion Nour El Sherbini claimed a remarkable sixth World Championship title after coming from behind to beat Egyptian compatriot and World No.1 Nouran Gohar 3-1 in 56 minutes. Ahead of the match, it was the World No.2 who held the superior head-to-head record, with the 26-year-old enjoying a 14-6 record against Gohar, including an impressive 3-1 win in the final of last year’s World Championship.

In the first of two Cairo-Alexandria derbies, it was Cairo native Gohar who made the stronger start to the match, before El Sherbini reeled her in as she found her length. A late-game Gohar barrage, though, soon delivered her the opening game 11-7, with the 24-year-old picking up a number of winners from the middle of the court.

El Sherbini made an unnervingly accurate start to the second game to take a quick 4-0 lead, before six unanswered Gohar points flipped the game’s momentum. El Sherbini in turn responded, playing some beautiful shots as she levelled the scores with an 11-7 win of her own.

In an attritional third game, both players had scoring runs as the ball became livelier and the rallies grew longer. It was the Alexandrian who was able to better adjust to these conditions, as she took a crucial lead with an 11-8 win.

Gohar had looked like she was improving at the end of game three. However, even after requesting a new ball for game four, it was her opponent El Sherbini who had the better of the opening stages of the fourth game. As both players battled hard, El Sherbini grew more and more comfortable, playing a number of tremendous winners to take her sixth World Championship title with another 11-7. 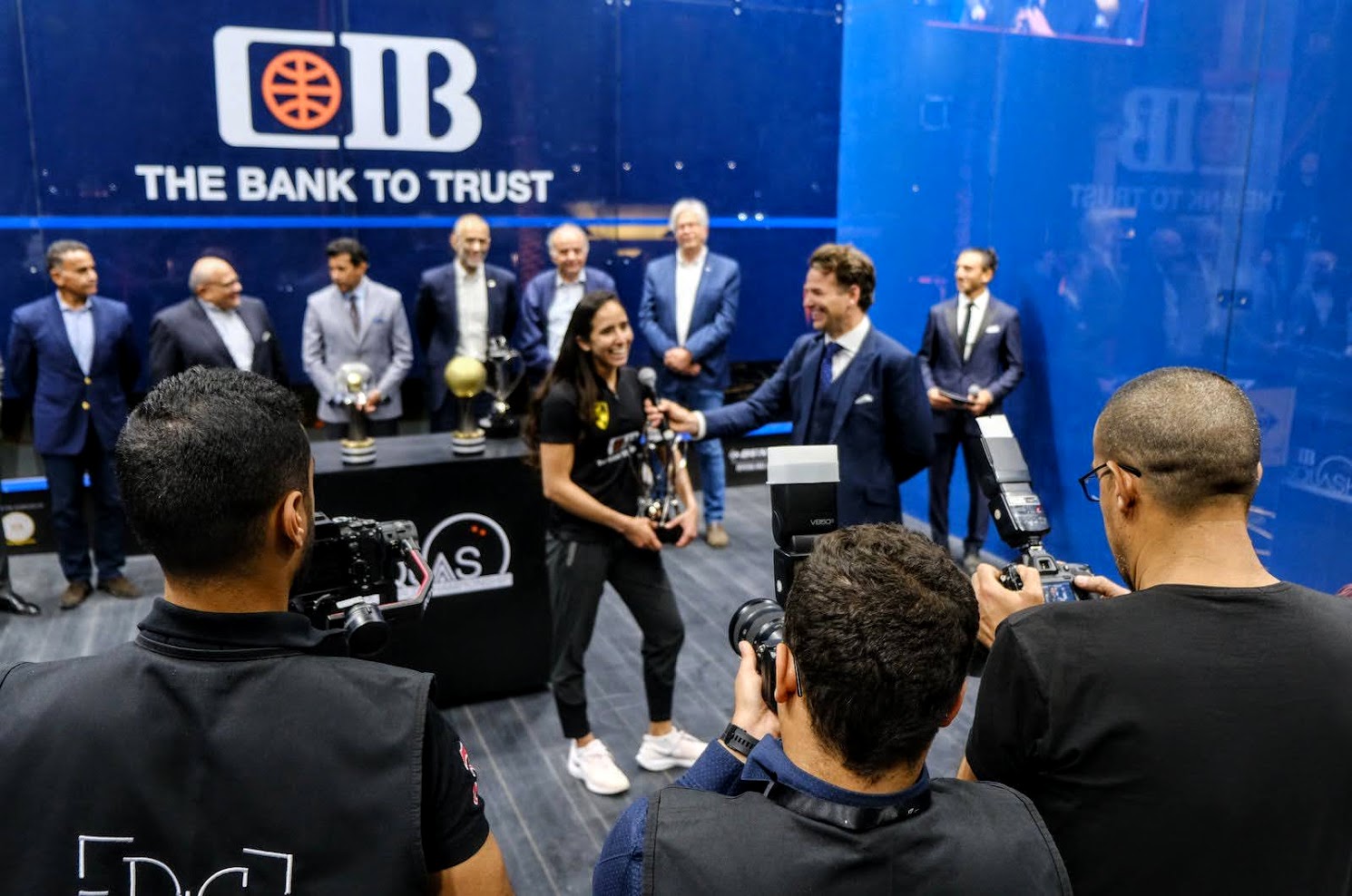 “Obviously I’m not going to say I’m super happy. It’s not the happiest day of my life.

“I’m just very proud of myself and the way I did things this year. I can see I’ve really improved, not only as a squash player, but as a person as well. I do accept these days and know what to take out of them, that’s why I became World No.1. Being World No.1 is not only about one or two tournaments, it’s about the whole year.

“I’m just proud of myself, my team and my sponsors, and everyone who believed in me and supported me from day one. I can assure you I won’t stop before having this title in my hands one day.

“After last year’s World Championship final, I had a lot of time to reflect and with my team we had a plan. Actually, what happened was better than the plan, I learnt a lot. If this match will make me learn more I’m happy to take it. If it’s going to be like last year I’m very happy to take it and learn from it. In the last half hour, I didn’t reflect that much, but I’m pretty sure that I’ll come back stronger.

“Obviously I have a very big team behind me who will help me in these days more than during my wins, so I just want to thank my team, my parents and my supporters. My whole family was here to support me, so thank you for coming to support me today.

“My team here in Egypt, Omar Abdel Aziz, my coach for the last 10 years and counting, thank you for being here for the downs and the ups. Thanks so much to my fitness Hossam Shaddad, my coach in the US, Rodney Martin, I’ve been doing a lot of work with him, so thanks for everything, my physiotherapists Mohamed Wafaai here in Egypt and also back in the States, my sponsors, my biggest supporter CIB, thanks so much for being the biggest supporter of squash in general, so a big appreciation for everything your doing for the sport.

Last but not least, my husband Ziad. I really miss him during the tournament and really need his support, but I’m sure he’s supporting me all the way, so thank you for the continued support. Last but not least, the crowd have been awesome all week. I like to play in Egypt and wanted to win my biggest title here. Hopefully I’ll see you next year!” 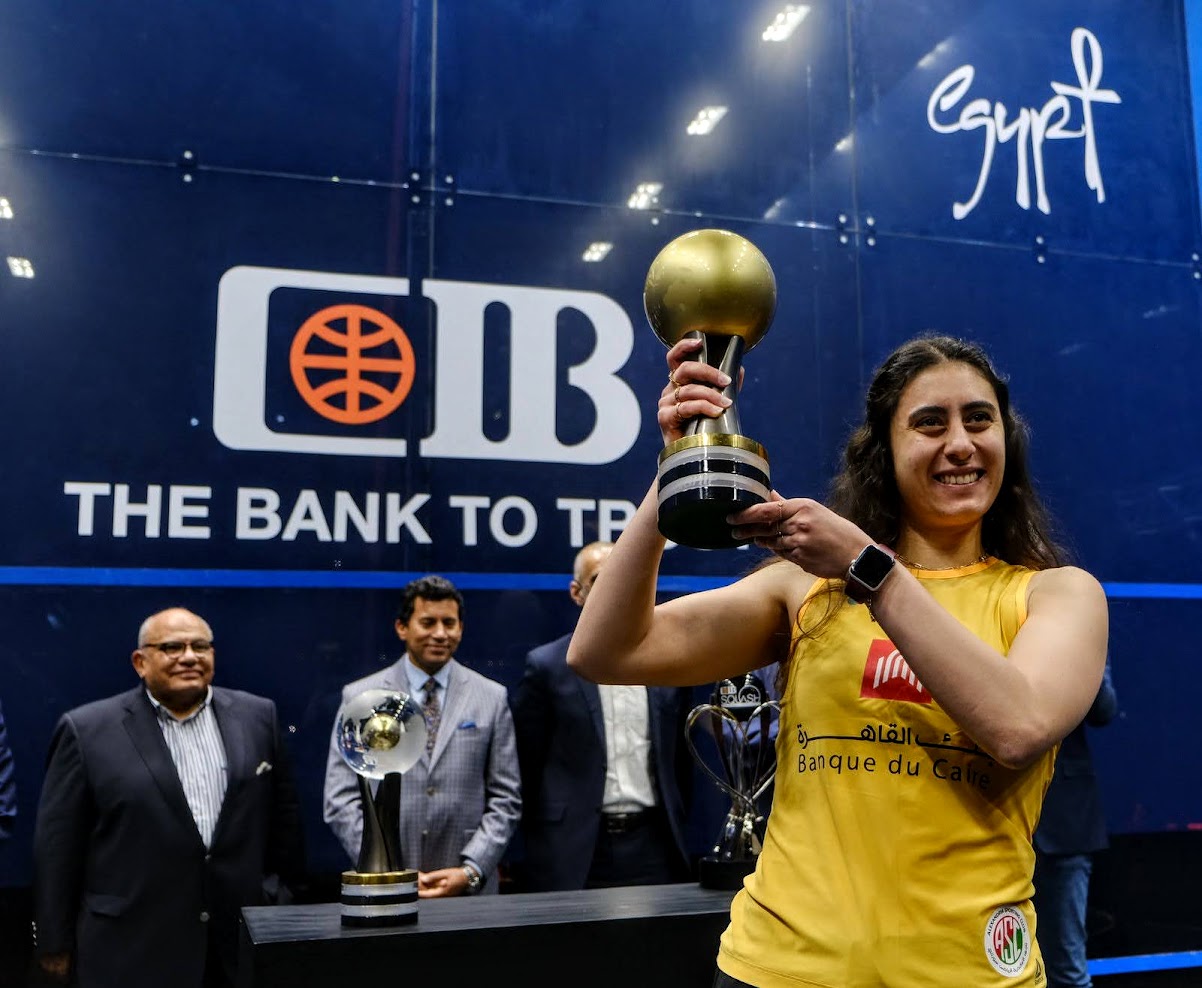 “It’s always a dream for me to win this tournament and I wait for it every year. I’m a bit emotional right now and it’s of course an unbelievable feeling. It’s been very hard, the last couple of months, I can’t believe I’m standing here right now, the tournament is over, everything is over. All the thinking, the mental stuff is over. I can’t describe how I’m feeling right now.

“Nouran is the best player right now. She’s on-form No.1, she deserves this spot. I think her results this season show why she’s in this place and she’s improved a lot. I’ve huge respect for her and how she’s changed and learnt and tried to get better. Every match is a challenge, she challenges me more and it’s hard playing her and it’s getting tougher.

“As you said, last time when I withdrew hurt partway through the CIB Black Ball Open final earlier this year, it wasn’t the best match between us. I didn’t finish the match. I didn’t want this match to end like this, so it was a bit challenging for me to come and play her again in the final of the World Champs after pulling out of the Black Ball Open. 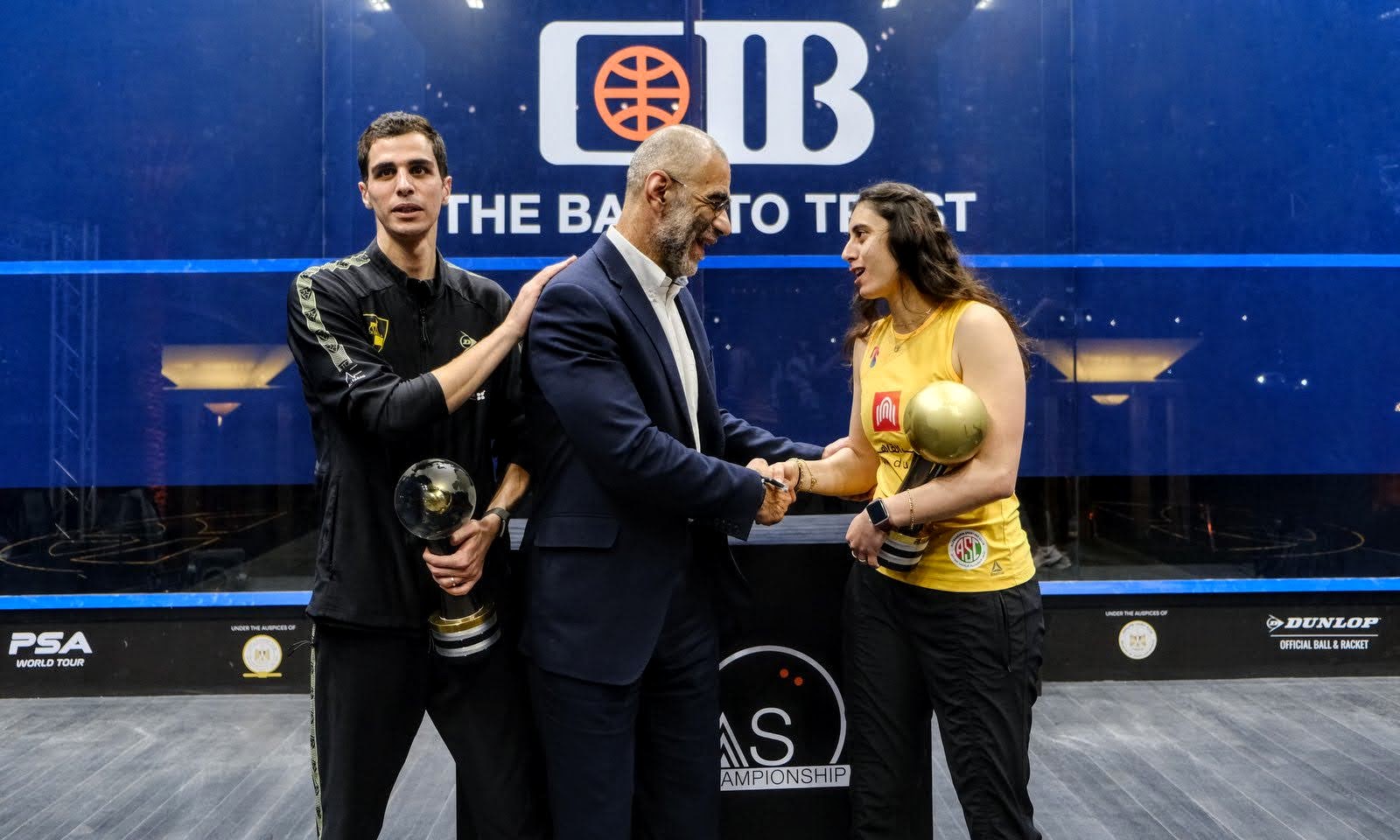