Despite World No.2 Farag being ranked seven places better than ElShorbagy, he has struggled in recent matches to get the better of the Alexandrian. ElShorbagy has been a constant thorn in Farag’s side, enjoying an 8-4 record over the Cairo native and winning the last four encounters, including in the quarter finals of this year’s Windy City Open.

It initially appeared that ‘The Jackal’ was going to continue this record, as he opened up a 6-2 lead in the first game. Farag, however, was able to put an end to the run and turn the momentum with an 11-7 win.

ElShorbagy toiled in the second and was unable to deliver any consistent threat to Farag’s position, as the No.2 seed took a commanding two-game lead with an 11-5 win.

While the younger ElShorbagy showed faint signs of a comeback in the the third, this was quickly snuffed out by the experienced Farag, who closed out the match in 39 minutes with an 11-7 victory in the third. 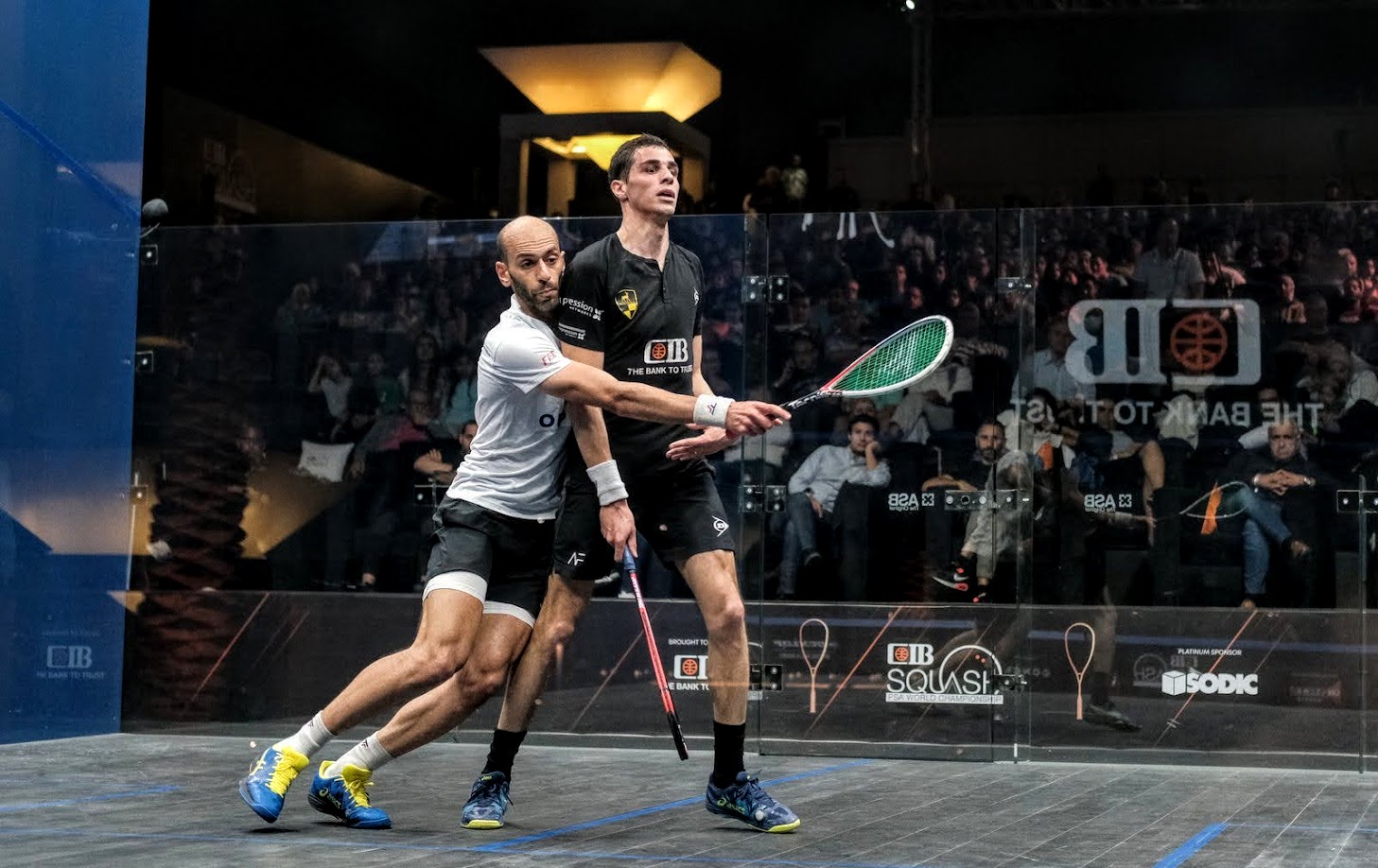 For me, Marwan is a mystery. I know he suffered an injury a few months ago that impaired his training/preparation. Was it troubling him again today? It’s like he cannot have a consistency in his wins. And when he starts to get to the top, a bit self destruct button… But what do I know.

I don’t know if apart from Basma and Hossam ElShorbagy, there was anybody that was NOT related or friends with Ali tonight in the VIP area! I’m kidding, but not that much actually… Between Nour El Tayeb match – if you don’t know she is Ali’s wife, you are probably on the wrong website – and Ali’s, the whole of the Farag/El Tayeb was enjoying the comfortable seats from the event!

The second game was pretty close till the middle of the game, 3/3, 4/5, but at the point, I could see Marwan trying to get into Ali’s mind, after a long rally at 4/3, asking the score several times while Ali was serving, then serving himself very quickly. And I know that he is doing that, it’s when he is tired, or running out of solutions. I guess it was the former, as Ali zoomed to 10/4 11/5 in 11m. 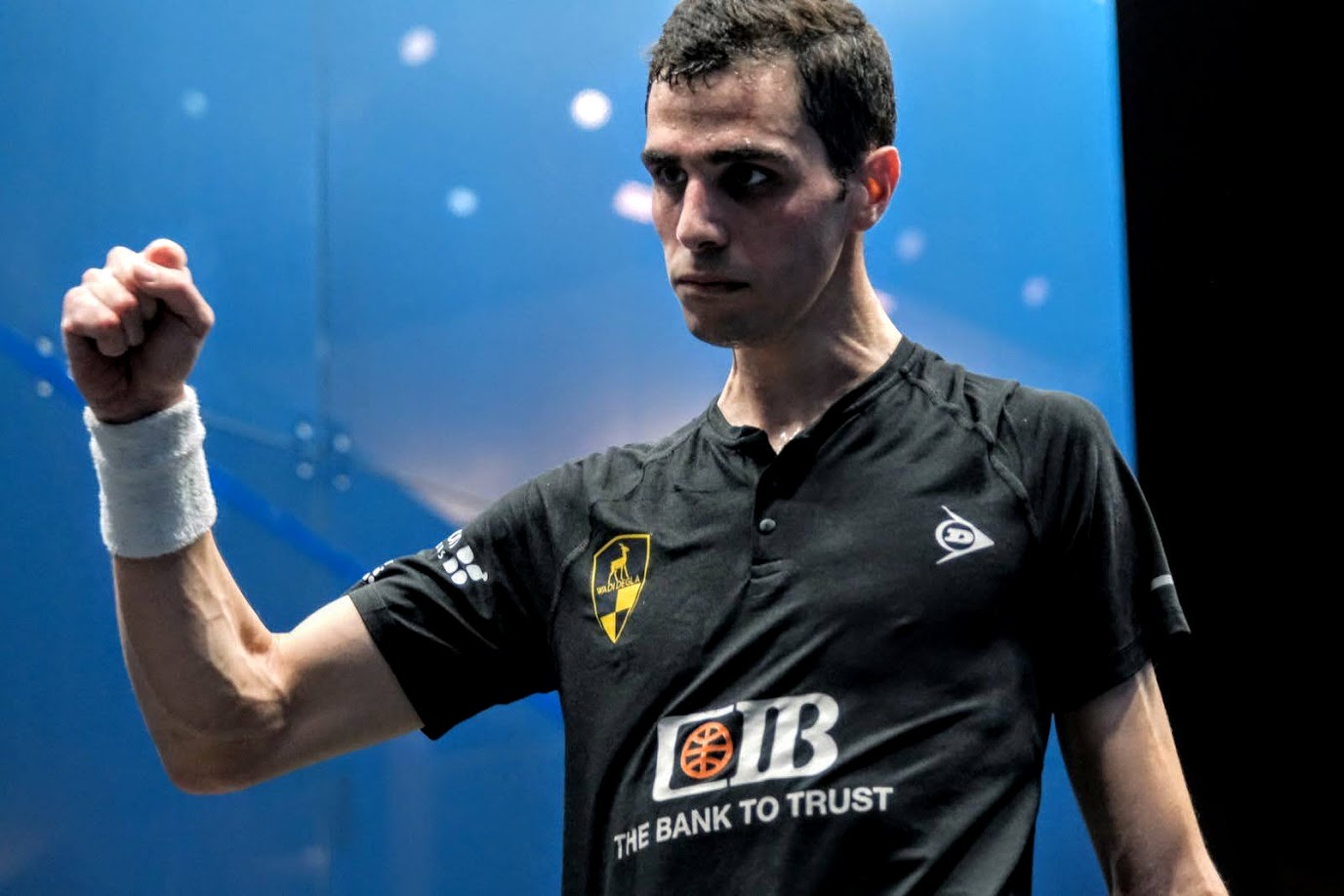 “I couldn’t have asked for a better setup to produce my best squash. CIB are taking the sport to another level that makes us feel very proud to be on court.

“I’ve got every single member of my support team, from the age of zero to 30 here with me. Everyone who’s here, I can’t be more inspired, I guess. And I hope I can keep up this brand of squash!

“Diego Elias and Mostafa Asal are extremely good. They’re very different players which is going to produce a great match. Asal is very explosive, very attacking, very aggressive at a very young age, but still very mature with his squash. Diego is a great mover of the ball, a very clean striker of the ball and a very smooth mover. They produced a great match in Canary Wharf and I’m sure it won’t be different today. I’m going to be watching that with a lot of studying along with my team, and hopefully I’ll be ready to fire tomorrow.

“I don’t think court conditions were challenging. I slipped once and Marwan slipped once and I asked him if it was slippery but I think it was a one-off incident. I was happy with the way I was covering the court, so I wasn’t complain. I’m not sure about Marwan, but I think it plays alright. This court is amazing with how true it is. We’ve tried a glass floor but it was too soon to play on it, but I cannot wait to play on a glass floor sometime very soon and thanks to CIB for breaking that again.

“I’d like to think it would benefit me, if the match between Elias and Asal goes long. But as Mohamed said yesterday and Paul Coll will show tomorrow, we train for those kind of battles and backing them up and we’re working on my body day in and day out. Whether I go in five or three, what matters is I go through, and I’ll get ready to watch Nour.