World No.2 and defending champion Nour El Sherbini saw off a resilient Sarah-Jane Perry to make her way through to the semi finals. El Sherbini made a strong start to the match, which was played with a slow ball that appeared to have been affected by a sandstorm in Cairo.

The Alexandrian played consistent lines and lengths in the opening game, which she took relatively comfortably with a six-minute 11-5 win.

Perry grew into the match in the second as she hunted El Sherbini and caused the World No.2 a number of problems, particularly in the front right. As Perry settled, El Sherbini’s accuracy suffered and Perry took full advantage to level with an 11-8 win.

While Perry continued to attack, El Sherbini rediscovered her length to limit opportunities for the Englishwoman while also coaxing her into riskier shots. With the threat from Perry blunted, the five-time World Champion was able to regain the lead with an 11-7 win in the third.

El Sherbini appeared to be closing out the match in the fourth, only for a brilliant spell of desperate defence from Perry to force the game into a tie break. Both players had opportunities to win the game but were unable to convert, before ‘The Warrior Princess’ was finally able to see off a dogged Perry with a 14-12 victory. 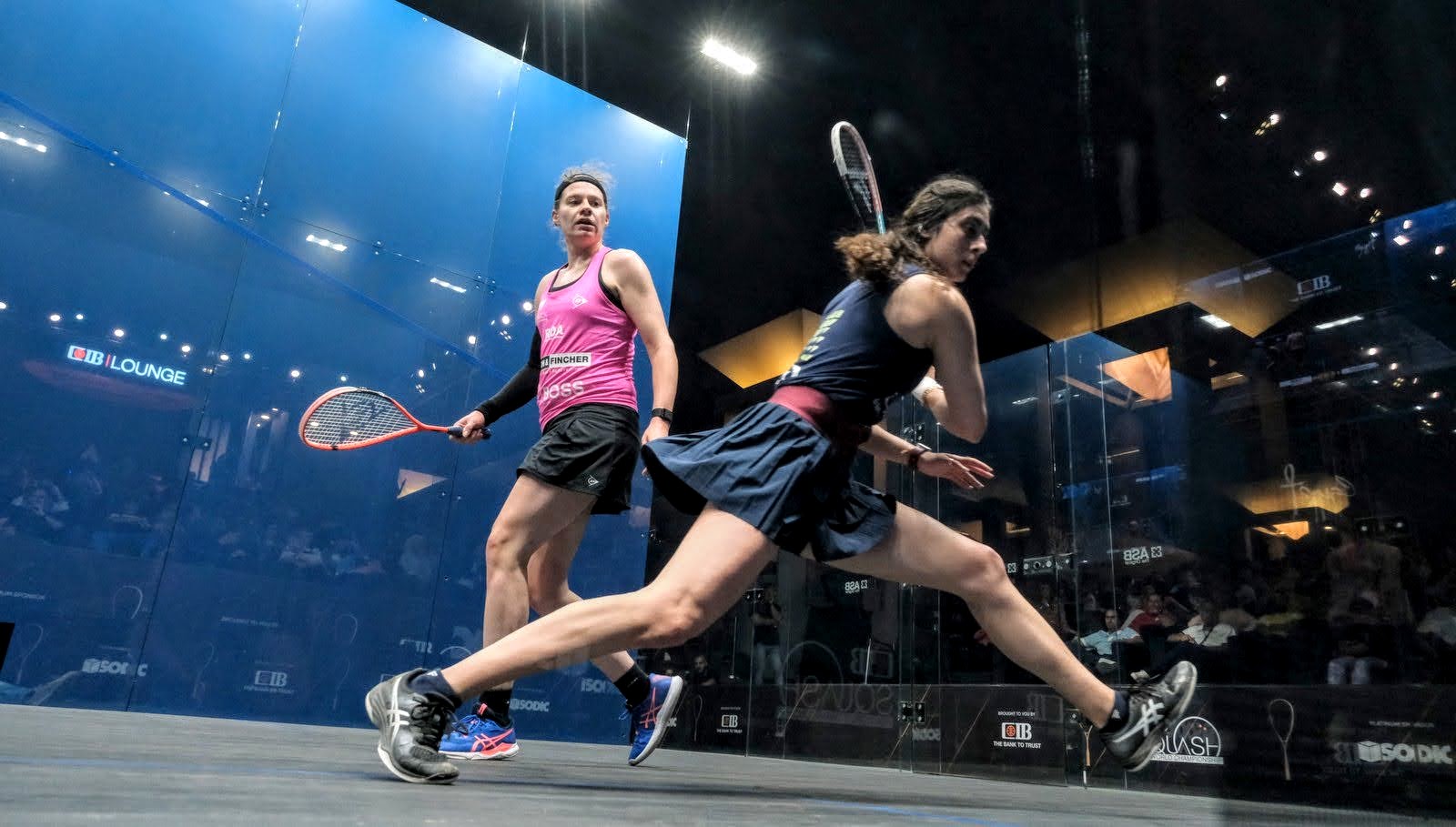 The evening didn’t start well and we were all a bit nervous as a sand storm decided to show its ugly nose about 45m before play! And a nice one, where the atmosphere goes all thick and orange. But after our “Homme à Tout Faire” Khaled cleaned thoroughly the floor several time, it seemed that the court was playable.

The Princess came back playing a better length/width, 4/1, 9/3, until she tried to finish the rallies far too quickly, letting the English number one clawing back, but two errors put a stop to SJ’s come back, 11/7, 8m game. Still no error from Nour, but 4 from SJ.

And in the fourth, we found about the same scenario than in the previous game, Nour looking in control, 3/0, 6/3, 7/4, 8/5. But as we were noticing with one of Nour’s camp that she was just playing every shot at the front, offering constant openings to SJ, only too happy to oblige!

One of the longest rallies of the match at that point, and finally Nour clinching the match on her 4th attempt, thanks to SJ’s fourth error of the last game. 14m game.

“I think [the blustery conditions] were a little distracting in the first game, but I think both of us adapted to the situation. After the first game we played a really good match and it was very entertaining.

“I think, in front of this crowd and in this venue [the distractions are] nothing. Just try to play your squash. They’re going to cheer everyone and make the players want to get the best out of them.

“The people who have come to support, I really don’t know how to thank you enough. From the first day, you’ve come to support us and that’s all that we need. You’re always special and having you beside us makes us want to play squash. Thank you so much for coming and I hope you enjoy the rest of the tournament!”